When I came out –– when I was reborn –– I began a new life. A figurative weight was lifted off of my shoulders, and an ethereal weight off my mind and heart. There was even a conscious awareness that I was letting go of, giving over, handing over to Jesus what was more than I felt able to carry any longer. And there was celebration, and light(ness). I began a new relationship and moved to a new city and began new work and made new friends and attended a new church.

But in order for this to happen, there was also some death. The death of my marriage. The death of my daily interaction with my daughter. The death of where I lived and worked. The death of some relationships. And I didn’t do this easily. I didn’t do this right away. Or all at once. I resisted. I had to learn to grieve the death and loss of these things before I could be fully present to what God was making new. And it became interwoven into the fabric of new celebrations and new relationships. And my grieving continued for a long time because I thought I could skip over it and land into all the new “stuff” pain-free. And some of it was really bittersweet, because it was impossible to predict the shape and form of these new things that were being birthed. It was a new wilderness journey into a new promised land.

And this, I think, is where we all are now. In a new wilderness headed towards a new promised land. And I am grieving it. The kinesthetically familiar patterns of activity and interaction are gone. It’s like being a blind person who knows the layout of all the furniture in their home; and someone comes in and rearranges all of it without letting me know. And so now I have to really slow down, and move cautiously, and feel my way around, to learn where and how things are. And I must become familiar enough with the new layout, so that over some time, I can become able to navigate my way around this “new normal” without having to think about it too much. It will take some time.

Author, poet, speaker, and social justice activist, Sonya Renee Taylor wrote:  “We will not go back to “normal.” Normal never was. Our pre-corona existence was not normal other than we normalized greed, inequity, exhaustion, depletion, extraction, disconnection, confusion, rage, hoarding, hate, and lack. We should not long to return, my friends. We are being given the opportunity to stitch a new garment. One that fits all of humanity and nature.”

So I wouldn’t be too quick to wish for the fleshpots of Egypt. I wouldn’t be too quick to return to too much of what used to be normal too quickly. The grief we feel is, for some, accompanied by a sense of trauma. Bishop Whayne said that he feels as though many of us are suffering from post-traumatic stress disorder. And trauma can trigger other unresolved emotions (energy in motion) from the past –– emotions that were never processed or resolved, but which became stuck. There is a layered-ness to what we feel and how we move in and through our inner emotional landscape.

And generally, we deal with grief as the result of one specific and concise event: the death of someone we love; leaving one job and taking another; moving from one city to another; leaving one religion or denomination because another speaks to our heart more clearly. But the grief with which we’re dealing is still evolving. It is still in process. There are unknown variables. And our grief is exacerbated because the cause (the pandemic) hasn’t ended yet. And this grief and pain can make it easier for us to self-isolate. We can set it aside for a time. But not for too long. And we certainly can’t pretend it’s not there, or it will come out later on to bite us.

It’s a sad time. There are deaths –– it seems –– of too many kinds. So be honest with how you feel. Name your emotions. Find someone with whom to talk. Or who can just listen. Call me. But out of every death comes some kind of new life. New birth. Death of a seed; birth of a tree. Death of a marriage; birth of new relationship. Death on the cross; an empty tomb. Grief and death do not have the final word. Woven into grief, is hope. And the hope that Jesus promised, is with us even now. 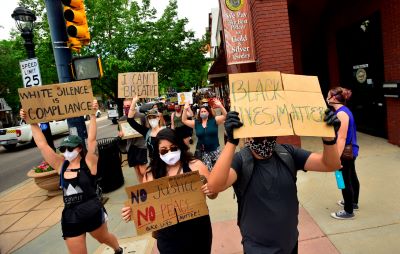